The Boy will be six in May and up until now, has been a relatively passive child. Lately however, he’s started digging his heels in on every possible occasion, even though often, the word comes out as a default response rather than an actual desire! This relatively sudden change has caught me totally off guard as I honestly thought that the ‘no’ stage was reserved for toddlers. Of course we went through the usual ‘no being a new and very powerful word’ stage, during toddlerhood, but this was relatively short lived and mostly ignored (being child number three!). I think it’s the ‘mind-changing’ that is truly driving me insane, the saying ‘no’ for the sake of just being awkward, it’s definitely attention seeking, all the way! For example, he loves bath time but you can guarantee that at the moment, when you ask if he’d like a bath, the immediate, without hesitation response, will be “No!”. More annoyingly than that is the fact that within the next 20 minutes (just about bedtime), he will change his mind and then have a full-on paddy, when it’s too late!

I’ve definitely been on a steep learning curb over the last couple of months so here are my top tips for dealing with Mr (or Mrs) No!

Don’t make empty threats. If they say ‘no’ and you decide on a consequence of that decision make sure you follow through. With the bath situation above, the Boy was told that if he didn’t have a bath now, there wouldn’t be time later. Despite the imminent paddy, when he changed his mind, I stuck to what I had said and let him strop! I won’t lie, he didn’t learn quickly but after a couple of missed baths, he got there!

This is a little trick I have learned which has worked with all of mine! If they refuse to do something, I will say ‘ok then, in that case, when you need help, I won’t be able to help you’. I will then follow that up by refusing their next request for a drink, snack, reaching a toy etc but give them the option to do whatever they had refused to do earlier in exchange for my help. This soon teaches a bit of give and take, encouraging the kids to help each other out as well as me!

3. Try to avoid questions and use statements instead.

If you want something done now, try using a statement incorporating something your child likes to do. Instead of saying ‘Could you get dressed now please?’ Say, “Let’s get dressed and then we can have breakfast/ go and feed the ducks/ play etc. I found that taking the focus off of what I want him to do, avoids an argument about it.

This is a bit more general and obviously helps with discipline in the broader context. Kids love routine, they might tell you otherwise but they thrive best when the rule stay the same and are enforced. Yes, they will push and break the rules but if you change the rules, to suit the situation or you, they will push you even further next time.

When they finally (however occasionally!) tow the line and say yes immediately, praise and reward to reinforce that behaviour. I made the mistake of not doing this until it was pointed out to me, it made such a difference with the added bonus of the other two being more eager to do something to help too!

When they do say ‘no’ it’s usually to gain attention as ‘no’ generally provokes a reaction, so try not to give it. Either use tip 2 or just say ok and walk away. Obviously the situation will dictate if this is possible and you can’t ignore an issue requiring discipline. When The Boy refused to get dressed, I said he could go to school in his pjs, he waited until the last minute and I honestly thought it was going to backfire, then, as the girls were getting on their coats, he raced upstairs and got dressed. I was ready to take his clothes into the car and even to school but I was pretty sure that it wouldn’t get that far! 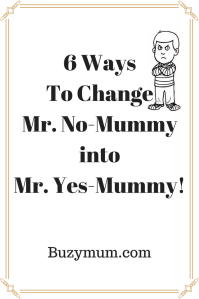 I’m not suggesting that any of these tips will turn your Mr. No into Mr. Yes overnight, I’ve still got a long way to go! I think consistency is key and like most things in parenting, it takes time and effort plus a fair amount of wine, to finally crack it!

If you have any tips to share, I need all of the help I can get!! If not, please send wine! xx