Last weeks post was all about our recent family holiday to Alcudia, Mallorca. The hotel combined with the location made it one of our best holidays yet and ideal for our children at their current ages. With that in mind, I’m following up this week with some more details about the hotel itself and what Alcudia has to offer. 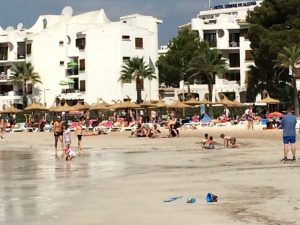 We stayed in a two bed apartment which slept six, it was spacious with a wrap-around balcony. A few months after booking, my mum mentioned that she might join us during our holiday, so after a bit of negotiation with the hotel, they agreed that she could join us and just pay the All-Inclusive upgrade fee (€48/ day) on arrival. When she arrived (a few days into our holiday) the manager couldn’t have been more helpful, he only charged €300 for the 7 nights and offered to bring another bed to the room should the sofa bed not be appropriate for my mum. The beds were all extremely comfortable with the double bed being huge and NOT two singles put together (something we often find in Spain) with a memory foam mattress. The girls were in bunk beds and the boy had a pull-out bed (from under the sofa) which we kept at floor level so he couldn’t fall out! Our only issue was that they didn’t seem to mop the balcony floor very often and because our room looked out onto the main street, it did get dusty. The view from our balcony was lovely and a great people-watching spot! Each evening, after showers, the kids had a bit of down-time on their iPads or a nap while we sat on the balcony with a drink watching the world go by- mainly youngsters playing Pokemon!! (I’m still not getting it!?!)

Though we stayed all-inclusive, the room was set up for self catering so there was a small kitchenette in the living area with sink, hob, microwave, fridge, cooking and dining implements plus some washing up liquid and a dish cloth. We kept the fridge stocked with water and used the sink for rinsing out our swimming stuff, so it was handy but not essential for an all inclusive stay.

As I mentioned last week, the food was pretty good. We were concerned about staying in a hotel that only offered a buffet, thinking that we would get bored with the choice and that the quality is never as good as a l’carte dining. We needn’t have worried as the food rocked! It really was excellent and that’s coming from someone who likes her food! Breakfast had the usual choices that you would expect, full English, every type of egg/ omelet cook to order, continental ham and cheeses, pancakes/ waffles, cereal, fruit, the list goes on. They also had various smoothies (5 or 6 choices) and the coffee machine used whole beans, none of that powdered ****, sorry but I’m a bit of a coffee snob and need my fix first thing, whether home or abroad!! For lunch and dinner, the chefs prepared and cooked food in front of you, and each evening, designed different ‘taster plates’ for both starter and main course which looked like something prepared in an expensive restaurant. Deserts abroad are never great- no one does pudding like us Brits! But the cake options weren’t bad, there was always ice cream and on a couple of evenings they produced chocolate fountains with DIY fruit and marshmallow skewers- the kids (and I) were in heaven! They also had a wide selection of cheese if sweet stuff’s not for you.

With the all inclusive option, there is the added bonus of ice lollies, ice-cream, slushies, fruit, sandwiches, bottled water and coffee, available to grab from machines and fridges/ freezers whenever we wanted during the day. All other drinks were available at the bar, with the majority being included, some branded alcoholic drinks were extra but at a reduced cost if you were inclusive, the wine (red and white) was fab- we are wine snobs too! They had a fab range of lollies and ice-creams (far better than the small pots of ice cream usually available on these types of holiday), though not the branded ones, they looked like Cornettos and Magnums as well as orange and strawberry ice lollies and choc-ices. Needless to say, the kids were happy with that (we did limit them to only one ice-cream type lolly/ day but they could have more of the ice-lollies) and even happier that they could help themselves! 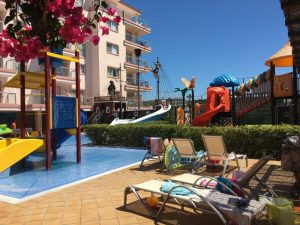 As well as having the pools, including a splash pool with a pirate ship and mini water slides, the kids club team were great! The kids dropped in and out of activities as they pleased, we didn’t need to sign them in and out or indeed sign up for anything. The club was open to all at no extra charge though there were a few paid for activities like t-shirt painting which cost €6, but children could go back to paint the same t-shirt over a few sessions at no extra cost. The girls joined in with various cooking activities, they made pizza, biscuits and smoothies that they then ate or brought over to us. They went on treasure hunts, practiced and performed circus tricks and a Lion King show and played giant Jenga and other outdoor games. The fun didn’t stop at dinner time with various activities beginning with children’s disco at 8pm followed by options for each age group during the main entertainment including football, slumber parties (an excuse for more sweets and crisps and party games), face painting & tatoos and colouring. The playground and bouncy castle were also still an option at this time if nothing else appealed! The evening shows were also sometimes appealing to the kids, acrobatics and Irish dancing being our favourite performances. As with many hotels that we’ve stayed in, the entertainment was a little cringe-worthy at times, especially the comedy and audience participation type acts! 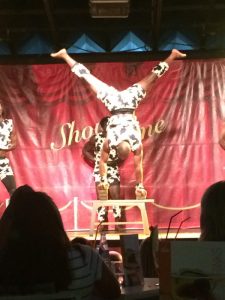 The only thing that let the hotel down was the cleanliness of the pool- it looked cloudy most of the time. For the amount of use it gets, I could understand that it would be difficult to keep clean but that did put me off a bit. Having said that, Lou is prone to ear infections and despite spending a lot of time underwater, she had no issues at all.

Out and About in Alcudia

Our favourite mode of transport had to be the horse-drawn carriages that act as taxis in the area! They became known as the ‘clip-clop’ during our stay and though we tended to walk to the beach, we always got a clip-clop back to the hotel. A lovely experience for the children (and we quite enjoyed it too!). We ate outside the hotel a few times, including one evening where J and I went out alone (whoop, whoop) and chose a more fancy restaurant! The food was exceptional, we were in seafood heaven:

There is a waterpark 5 minutes away (we could see it from our balcony) but we didn’t try it and the area is renowned for cycling -if that floats your boat! As I mentioned last week, the bay by the port was beautiful and ideal for children, where they played for hours finding hermit crabs and spotting shoals of fish in the shallows. Various water sports were also available on the beach including windsurfing, sailing, scuba and motor-boats, everything you would expect from a beach resort. 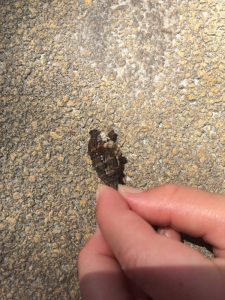 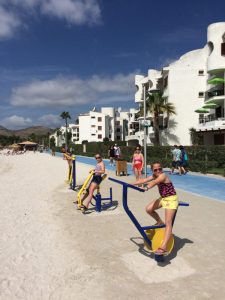 So, would we go back? We would definitely look at staying in Viva hotels in the future but I think K is at the upper age limit for their facilities at Viva Sunrise. It is ideal for families with younger children up to around 10 years old (K’s age), though they did offer some activities for teenagers, we didn’t see many families with children older than K. We will, without a doubt, return to Alcudia, Mallorca.

10 thoughts on “A Holiday at Viva Sunrise, Alcudia, Mallorca”